SharePoint 2013 apps can run on both environment types

Why do I choose the new app Model ??? 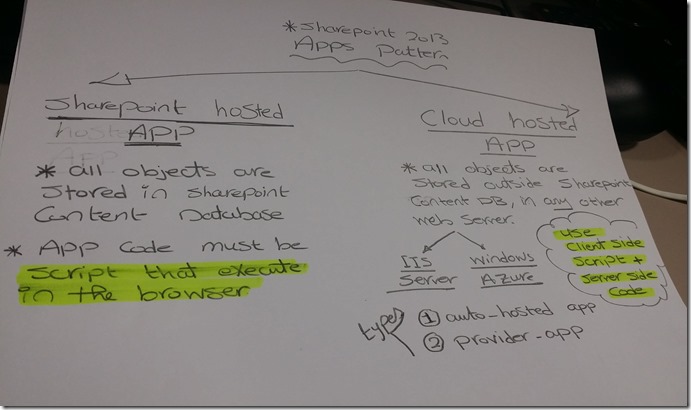 in a shareppint hosted app, you can only run client side script code so you must use the jsavascript CSOM to access SharePoint

in cloud hosted app, all of the above is availble plus ASP.Net web forms, ASP.Net MVC, and PHP

So as a developer

host web –> the site which SharePoint app installed in it

harePoint 2013 is a multi-tenant application; in other words, it is designed for hosted environments in
which multiple customers subscribe to SharePoint services from a service provider. In such environments,
there is one SharePoint farm but each customer must be isolated from the others to ensure that no
sensitive data is inadvertently published to unauthorized users from other customers

First, we will hit the SharePoint hosted app model

sharepoint apps can run on

Location of to deploy the app

encapsulate your app into a package, which is a single file of a standard format, a package contains all the files and information necessary to run the app in another SharePoint system

a package is a compressed file with the .app extension. the contents of the package file varies depending on whether you havebuilt a SharePoint hosted or cloud hosted app

OData, REST, REST API What are the differences ?

This is a widgetized sidebar area and you can place any widget here, as you would with the classic WordPress sidebar.